I am delighted to be featured in the forthcoming Spring Summer 2019 edition of Abercrombie & Kent’s Sundown magazine. 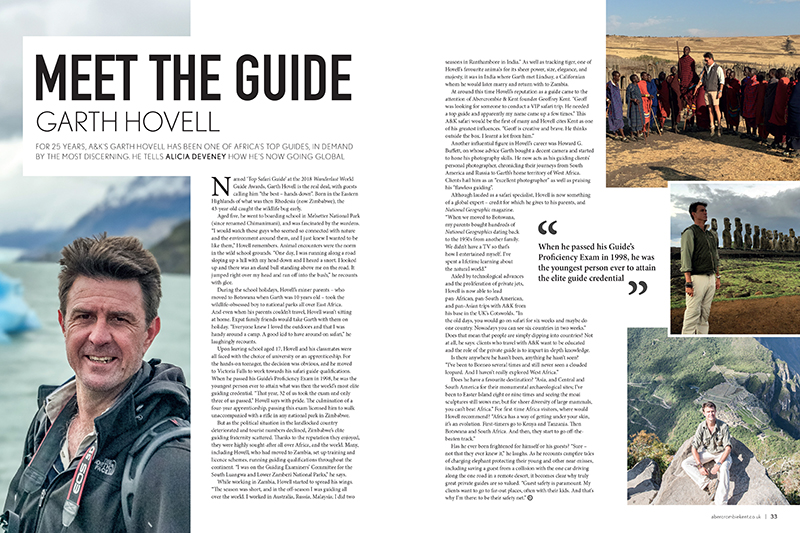 FOR 25 YEARS, A&K’S GARTH HOVELL HAS BEEN ONE OF AFRICA’S TOP GUIDES, IN DEMAND BY THE MOST DISCERNING. HE TELLS ALICIA DEVENEY HOW HE’S NOW GOING GLOBAL

Named ‘Top Safari Guide’ at the 2018 Wanderlust World Guide Awards, Garth Hovell is the real deal, with guests calling him “the best – hands down”. Born in the Eastern Highlands of what was then Rhodesia (now Zimbabwe), the 43-year-old caught the wildlife bug early.

Aged five, he went to boarding school in Melsetter National Park (since renamed Chimanimani), and was fascinated by the wardens. “I would watch these guys who seemed so connected with nature and the environment around them, and I just knew I wanted to be like them,” Hovell remembers. Animal encounters were the norm in the wild school grounds. “One day, I was running along a road sloping up a hill with my head down and I heard a snort. I looked up and there was an eland bull standing above me on the road. It jumped right over my head and ran off into the bush,” he recounts with glee.

During the school holidays, Hovell’s miner parents – who moved to Botswana when Garth was 10 years old – took the wildlife-obsessed boy to national parks all over East Africa. And even when his parents couldn’t travel, Hovell wasn’t sitting at home. Expat family friends would take Garth with them on holiday. “Everyone knew I loved the outdoors and that I was handy around a camp. A good kid to have around on safari,” he laughingly recounts.

Upon leaving school aged 17, Hovell and his classmates were all faced with the choice of university or an apprenticeship. For the hands-on teenager, the decision was obvious, and he moved to Victoria Falls to work towards his safari guide qualifications. When he passed his Guide’s Proficiency Exam in 1998, he was the youngest person ever to attain what was then the world’s most elite guiding credential. “ That year, 32 of us took the exam and only three of us passed,” Hovell says with pride. The culmination of a four-year apprenticeship, passing this exam licensed him to walk unaccompanied with a rifle in any national park in Zimbabwe.

But as the political situation in the landlocked country deteriorated and tourist numbers declined, Zimbabwe’s elite guiding fraternity scattered. Thanks to the reputation they enjoyed, they were highly sought-after all over Africa, and the world. Many, including Hovell, who had moved to Zambia, set up training and licence schemes, running guiding qualifications throughout the continent. “I was on the Guiding Examiners’ Committee for the South Luangwa and Lower Zambezi National Parks,” he says.

While working in Zambia, Hovell started to spread his wings. “thee season was short, and in the off-season I was guiding all over the world. I worked in Australia, Russia, Malaysia; I did two seasons in Ranthambore in India.” As well as tracking tiger, one of Hovell’s favourite animals for its sheer power, size, elegance, and majesty, it was in India where Garth met Lindsay, a Californian whom he would later marry and return with to Zambia.

“When he passed his Guide’s Pro ciency Exam in 1998, he was the youngest person ever to attain the elite guide credential.”

At around this time Hovell’s reputation as a guide came to the attention of Abercrombie & Kent founder Geoffrey Kent. “Geoff was looking for someone to conduct a VIP safari trip. He needed a top guide and apparently my name came up a few times.” This A&K safari would be the first of many and Hovell cites Kent as one of his greatest influences. “Geoff is creative and brave. He thinks outside the box. I learnt a lot from him.”

Another influential figure in Hovell’s career was Howard G. Buffett, on whose advice Garth bought a decent camera and started to hone his photography skills. He now acts as his guiding clients’ personal photographer, chronicling their journeys from South America and Russia to Garth’s home territory of East Africa. Clients hail him as an “excellent photographer” as well as praising his “ flawless guiding”.

Although lauded as a safari specialist, Hovell is now something of a global expert – credit for which he gives to his parents, and National Geographic magazine. “When we moved to Botswana, my parents bought hundreds of National Geographics dating back to the 1950s from another family. We didn’t have a TV so that’s how I entertained myself. I’ve spent a lifetime learning about the natural world.”

Aided by technological advances and the proliferation of private jets, Hovell is now able to lead pan-African, pan-South American, and pan-Asian trips with A&K from his base in the UK’s Cotswolds. “In the old days, you would go on safari for six weeks and maybe do one country. Nowadays you can see six countries in two weeks.” Does that mean that people are simply dipping into countries? Not at all, he says: clients who travel with A&K want to be educated and the role of the private guide is to impart in-depth knowledge.

Is there anywhere he hasn’t been, anything he hasn’t seen? “I’ve been to Borneo several times and still never seen a clouded leopard. And I haven’t really explored West Africa.”

Does he have a favourite destination? “Asia, and Central and South America for their monumental archaeological sites; I’ve been to Easter Island eight or nine times and seeing the moai sculptures still wows me; but for sheer diversity of large mammals, you can’t beat Africa.” For first-time Africa visitors, where would Hovell recommend? “Africa has a way of getting under your skin, it’s an evolution. First-timers go to Kenya and Tanzania. Then Botswana and South Africa. And then, they start to go off-the-beaten track.”

Has he ever been frightened for himself or his guests? “Sure – not that they ever knew it,” he laughs. As he recounts campfire tales of charging elephant protecting their young and other near-misses, including saving a guest from a collision with the one car driving along the one road in a remote desert, it becomes clear why truly great private guides are so valued. “Guest safety is paramount. My clients want to go to far-out places, often with their kids. And that’s why I’m there: to be their safety net.”